The Palmer Corn Circle
by Scott Browne
It was August, 2001 and I found myself standing on the edge of a strange circular formation in a local field of corn in Palmer, MA, The early morning sun was slipping it’s fingers through the trees on the hillside and the fresh air had the familiar scent of fresh cut New England grass. The owner of the land stood watching me intently with much curiosity. With a thousand thoughts running through my mind, I dropped to my knees and begin to crawl along the outer edge of the circle, making sure not to disturb the soil or the plants.

Two days prior, I received an email which stated even though I was merely an investigator trainee for MUFON, I was asked to investigate, as the incident took place approximately a mile from my home. As I drove to the area two days after it took place, I formed the preconceived notion that this was a simple case of vandalism and that I could find evidence to support this. I couldn’t have been further from the truth…

As I pulled into their driveway Mr. and Mrs. Sasur, who appeared to be in their 70’s and very mobile, met me on the front step with smiles and kind words. Their yard and outlying areas were crowded with a variety of plants and flowers like a page out of a storybook, clearly leading me to see that they both loved being outdoors, gardening. 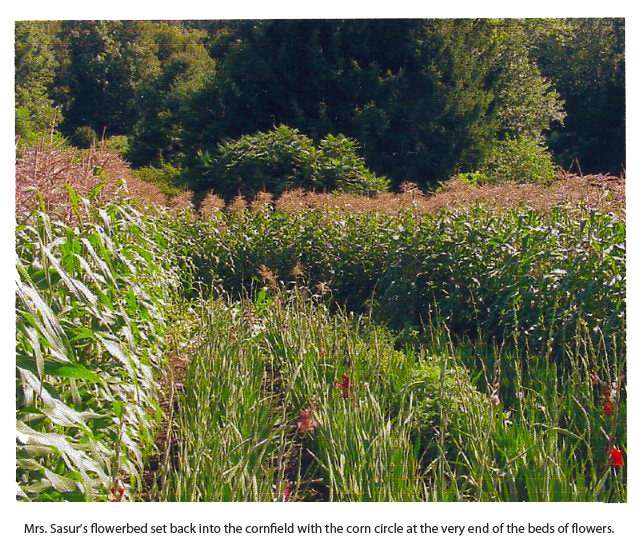 Mr. Sasur explained that his son lived a few hundred feet up the road and it was his idea to contact MUFON (Mutual UFO Network) because he and his wife weren’t sure who to go to about this unprecedented event. He then proceeded to tell me that people inside four separate homes witnessed a strange light during the night the morning before the formation was found, including his own wife.

My ears perked up because this particular information was not given to me, but at the same time, I still kept a skeptical, rational point of view. The witness living furthest from the formation was a Palmer police officer, which is what most investigators dream about for a simple fact of credibility. I was intrigued and excited but as they say, didn’t get my hopes up. 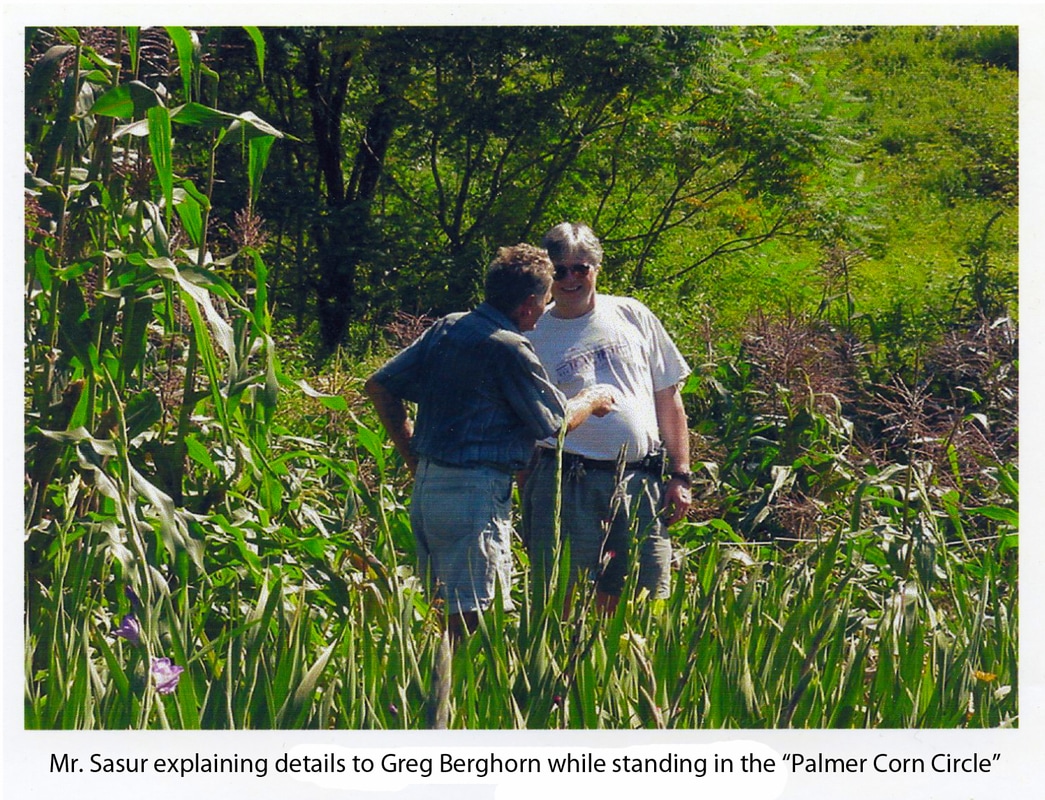 Mrs. Sasur excused herself to return to some baking which smelled like a plethora of goodies pouring from every open window in their cottage-like home. I followed Mr. Sasur as he lead me around the back of the house down a small well-worn path to his modest cornfield. The Sasurs were well-known in town for operating a ski resort on the same land back in the 1960’s and 1970’s called Hemlock Hill. It was small, but attracted people from all over the state and made for a great day for a family outing. 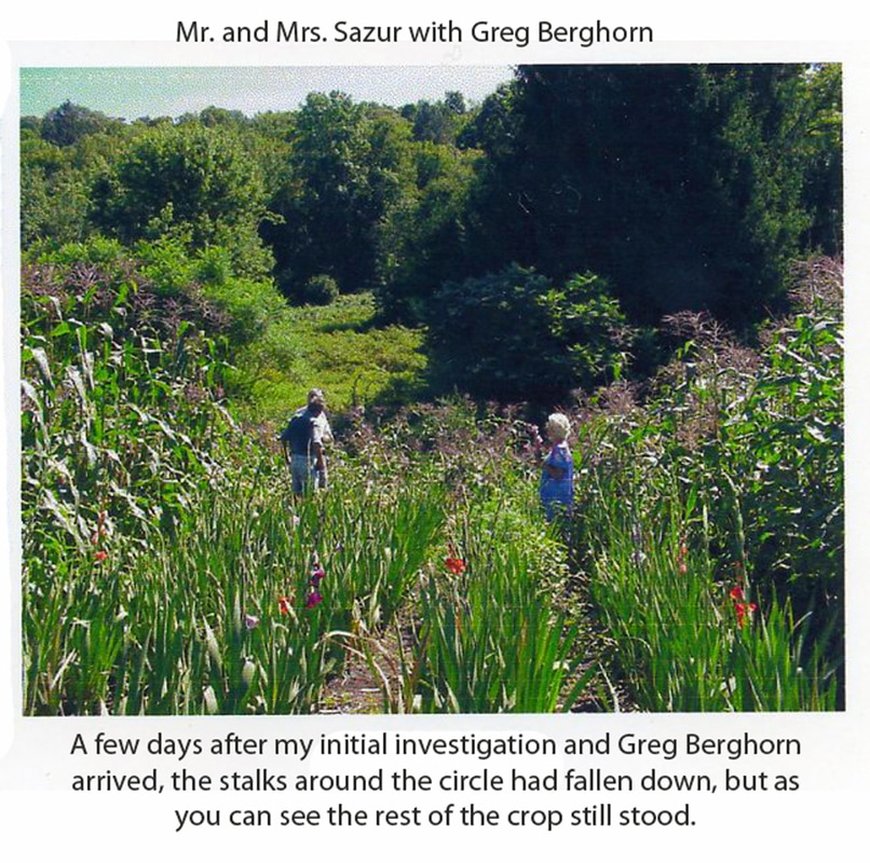 Since that time, the friendly couple sold a variety of flowers and vegetables from a roadside stand in front of the house. As we stepped up in front of the cornfield I gazed up at the hillside and could clearly make out where the ski trails had once been, but were now grown over with thick vegetation.

The corn itself occupied approximately 1 acre and extended back into the corn were five or six rows of numerous flowers which Mr. Sasur explained, his wife took plenty of pride in. The flower bed was approximately 30 to 40 feet long and the circle formation was at the very end of it in the middle of the cornfield. As we walked to the end of the flower bed and stopped where it met the formation, I observed that not one flower was harmed or a stem broken. We talked a bit more and Mr. Sasur said he would be back after tending to some things in the house. 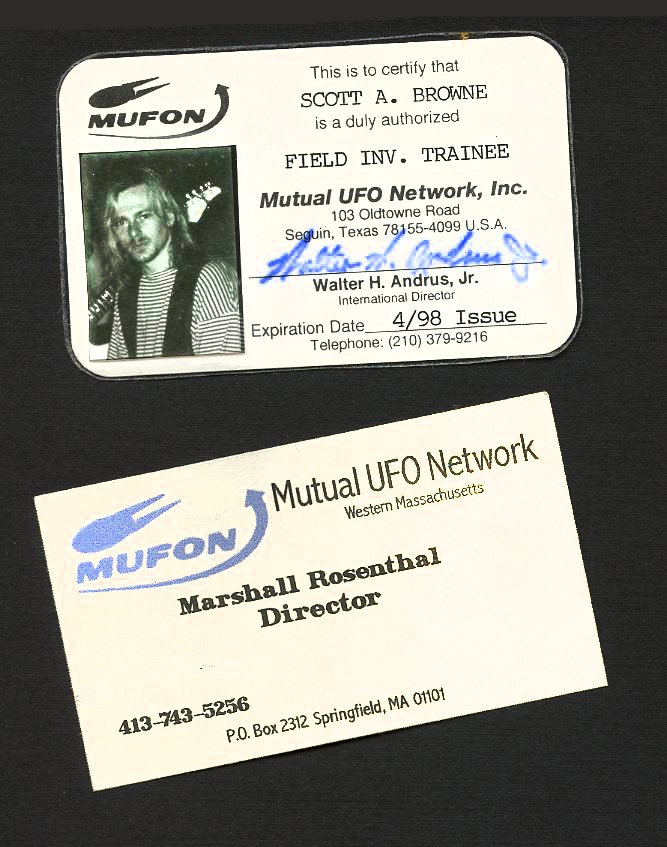 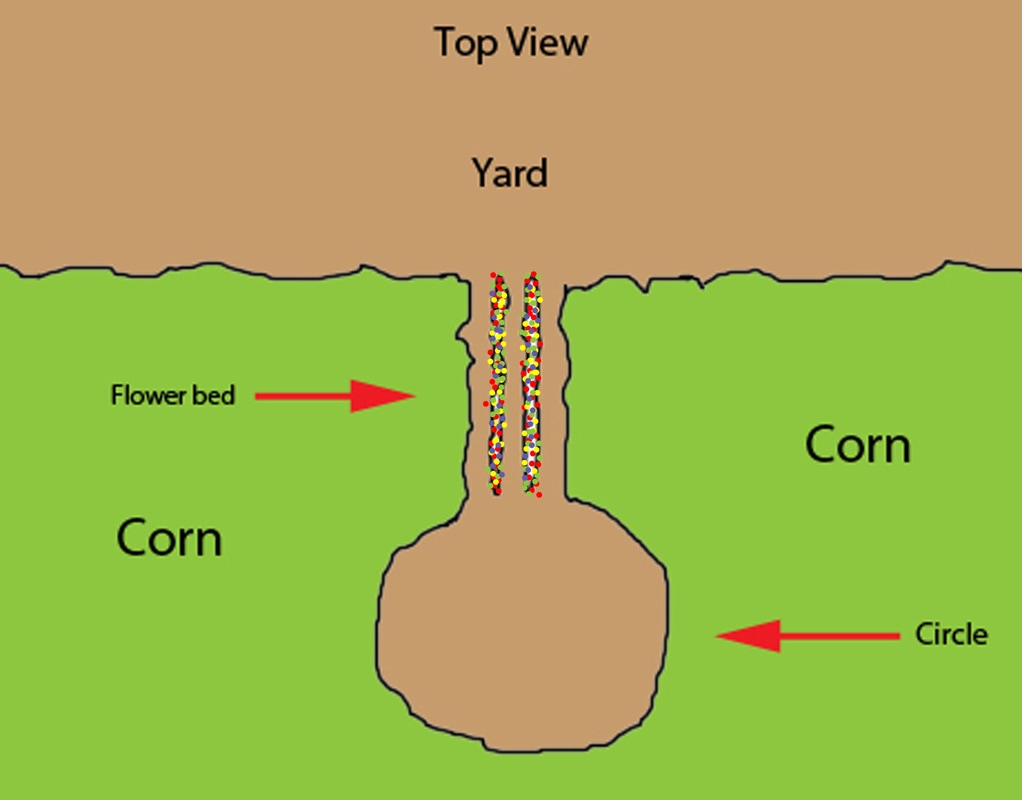 I documented everything and took testimony from all of the people who lived in the homes around the area including the police officer.

Mrs. Sasur said she was awoken by bright lights and moved to the kitchen to investigate. Stepping towards the window and saw that the outside was lit up as if it were daytime and that the tops of the trees were clearly visible as if there was stadium lighting. Thinking maybe the police were looking for something with searchlights, she went to the front of the house but spotted no cars or people anywhere. When she returned to the back window all was dark, the light was gone and she set off back to bed.At approximately 9:00 am the next morning she said she got up and went outside to clip flowers from her garden. This is when she discovered the area of depressed corn just off of her flower area. At this point was when she thought the light and the flattened corn maybe connected in some way. After she informed her husband, he returned to the damaged area to try to lift some of the flattened stalks that were overlapping on to the flower garden. When he tried to stand them or push them in the opposite direction they would snap right back to the original flattened state, which prompted him to get shears and cut a majority of the middle area out.

When the Sasur’s mentioned these strange events to the daughter (who lives in the house directly to the right of her parents home), she remembered being awakened at the same time by a light outside, but thought it was strange to have lightning with no thunder or noise at all. Mr. Sasur then went to ask his neighbor Mr. Richard M. Atkinson (who lives directly to the left of the Sasur home) if he had noticed anything unusual during the night in question.

Mr. Atkinson stated that he awoke to go to the bathroom at around 2:00 a.m. and as he passed the window he noticed beams of light fanning through the corn stalks in the backyard. He assumed that Mr. Sasur was out in the corn field checking on his plants so he went back to bed and forgot all about it until it was brought up again.

Approx. 3 houses down from the Sasur residence lives a Palmer Police Lt. who stated to Mr. Sasur that one the 12th or 13th he had seen what he thought was the moon up above the hill slightly to the east of the circle while out in his hot tob with his fiance. As he studied it more it became like searchlight beams in the sky were panning back and forth. It eventually disappeared and they forgot about it until the circle was discovered. 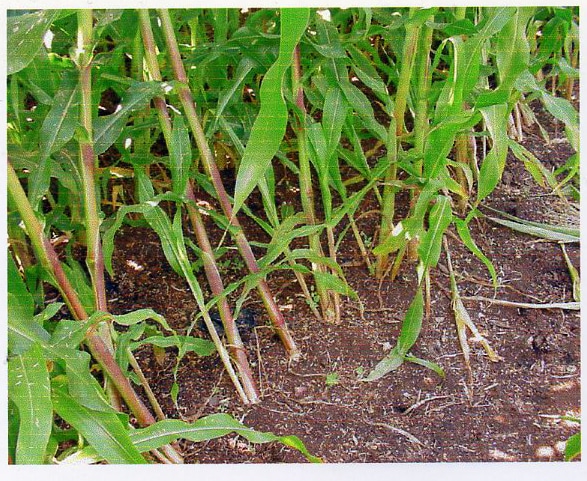 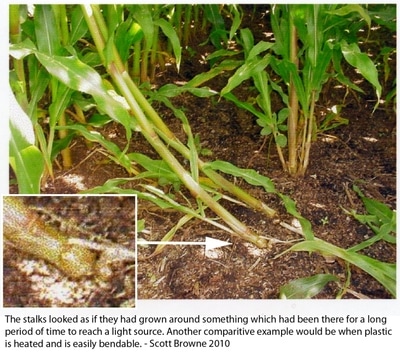 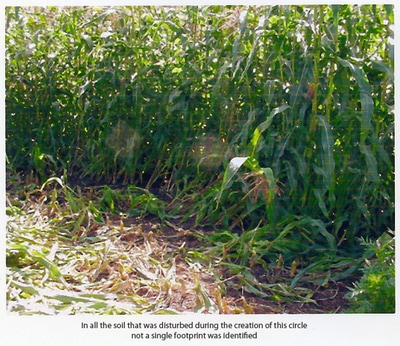 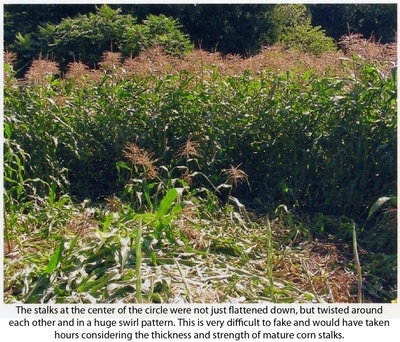 A few days later they sent another investigator from MUFON and I drove up and met him at the property, but by this time most of the corn crop had fallen down so the circle was virtually unrecognizable.Everything about this case was baffling and other farmers came from all over the area to look at the circle. Soon, word got out and people began to trample through their backyard until Mr. Sasur put an abrupt stop to it.

As it turns out the samples of the corn stocks that were taken were apparently subjected to some sort of microwave radiation according to MUFON. We found more questions than answers and hopefully someday we will be able to explain this but as of now it is classified as an unknown event. It’s still haunts me to this day.

CIRCLE DESCRIPTION:
The depressed area of corn is approx. 18 ft. in diameter with the stalks on the outer perimeter curved outward. The circle lies at the end of a flowerbed set back into a large corn crop. Mr. Sasur and his son demonstrated bending the corn to reproduce this curved appearance, but the stalks either snapped back straight or cracked and broke. These stalks are approx. 10 ft. tall, green, strong, and the curved examples look as a plant would if it was forced to grow around something to get to a light source. Mr. Sasur stated that he called a local farmer from down the road to come take a look and see what he thought. When he arrived he said that in his 40 plus years of farming he has never seen anything like it. Mr. Sasur stated that when he first arrived the stalks in the middle were mostly lying south to north. There was no noise associated with the incidents. 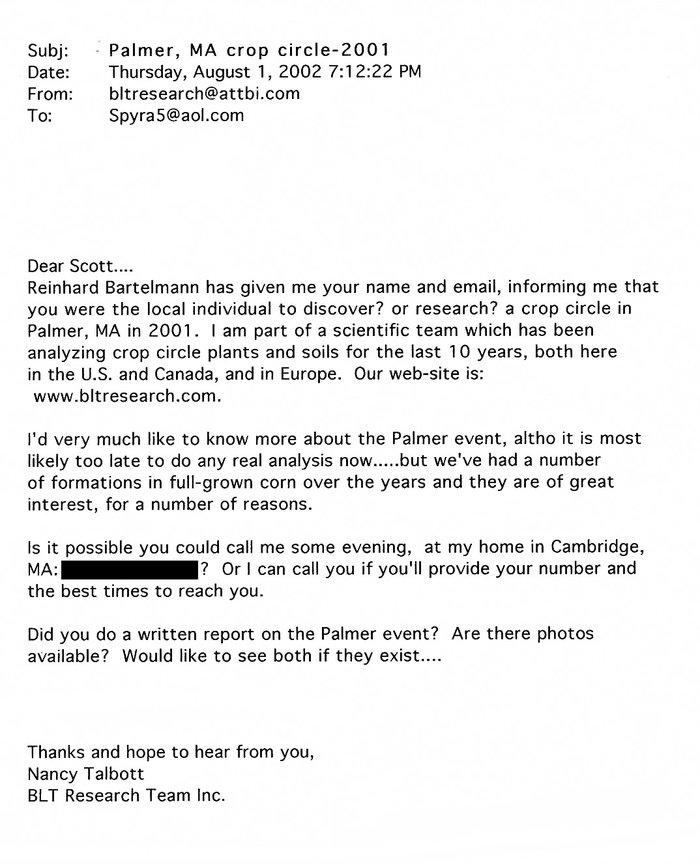 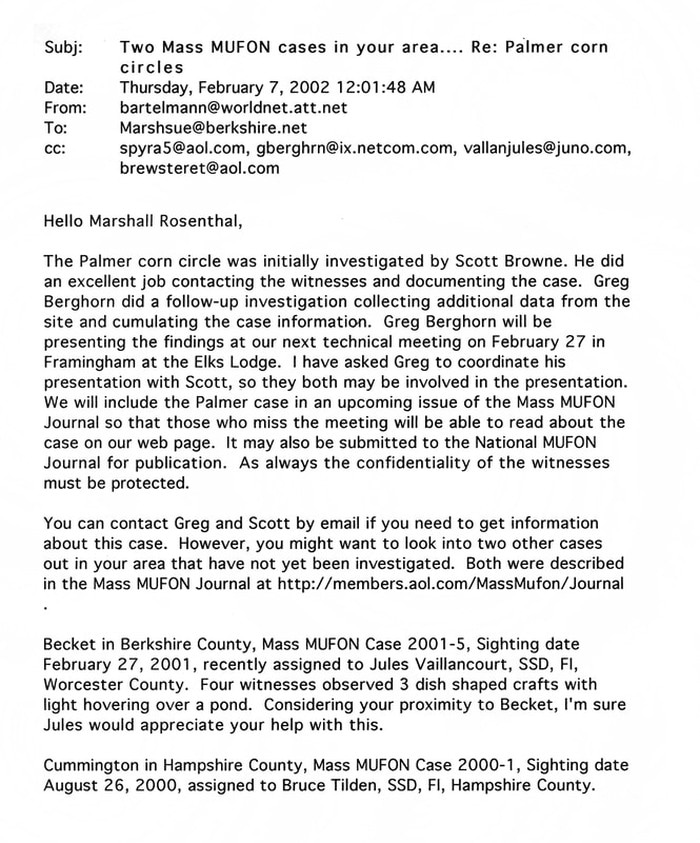 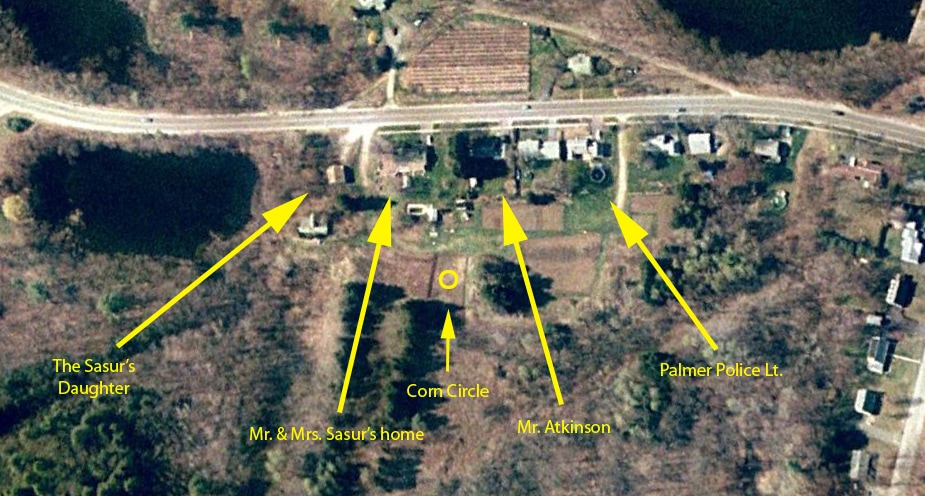