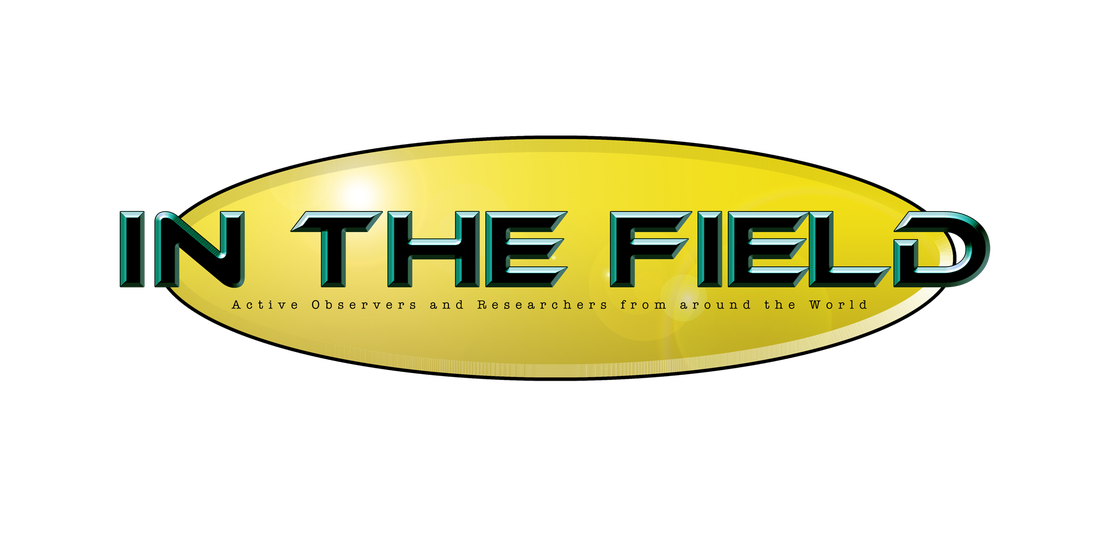 The Twisted Layers of Ufology
by Scott Browne

Much has been said about “The Age of Information” we now gleefully inhabit, but not much has been said concerning the viral spread of dis/misinformation during this breakthrough era.
The total freedom of being able to publish anything on the Internet has given rise to a tidal wave of manufactured news, viral hoaxes and false information posing as facts. An immense part of the problem consists of the average person posting a photo, video or an article that is already been shown to be false or hoax information without taking the time to look into it to determine its legitimacy.

"The total freedom of being able to publish anything on the Internet has given rise to a tidal wave of manufactured news, viral hoaxes and false information posing as facts." 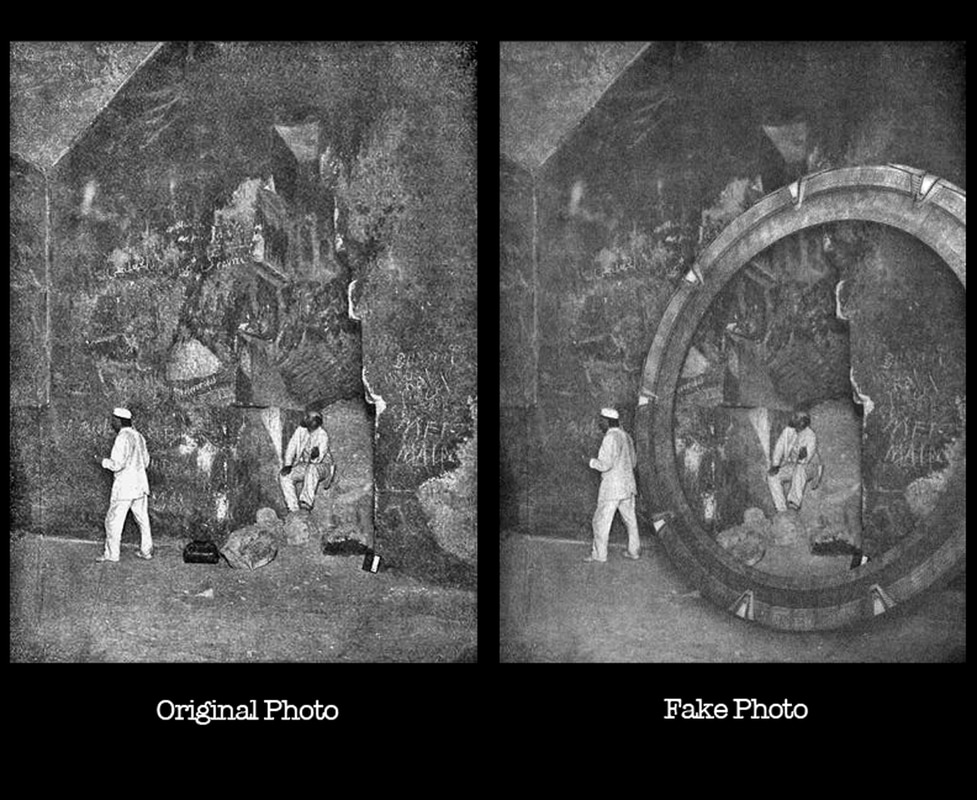 On any given day I can have a dozen or so of these arrive in my Facebook Group Page, many having been passed around for years receiving thousands and sometimes millions of hits or shares.
Sometimes, when a person is set in their ways with preconceived notions, it is almost impossible to present them with the truth. For example, an untouched photo is presented alongside of the fake one. I’ve had people get very hostile with me and call me a disinformation agent or worse. 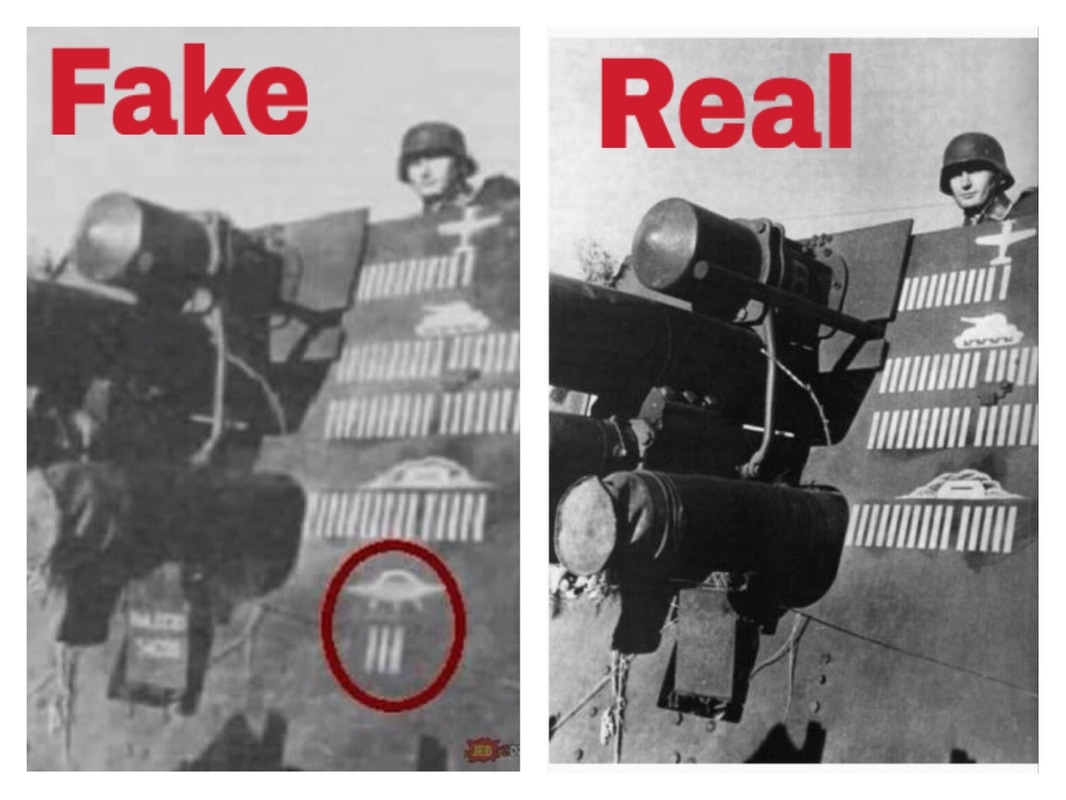 This type of behavior is very common in many diverse areas, but very prominent within the world of ufology keeping many false legends and mythologies alive. It also allows the numerous hoaxers to derive quite an income by preying on the gullible and the easily swayed.

Some people know me within the community of ufology as the founder of the group known as ITF or “In The Field”. The birth of this group was directly influenced, but what I like to call “The layers of ufology” and what I mean by this is that there exists 3 main layers or levels to participants that involve themselves with facts and information concerning this phenomena. I am well acquainted with all of them because I began my search in the top layer and over the past 30 years have slowly moved into the bottom layer which is where I now make my permanent home when it comes to research. 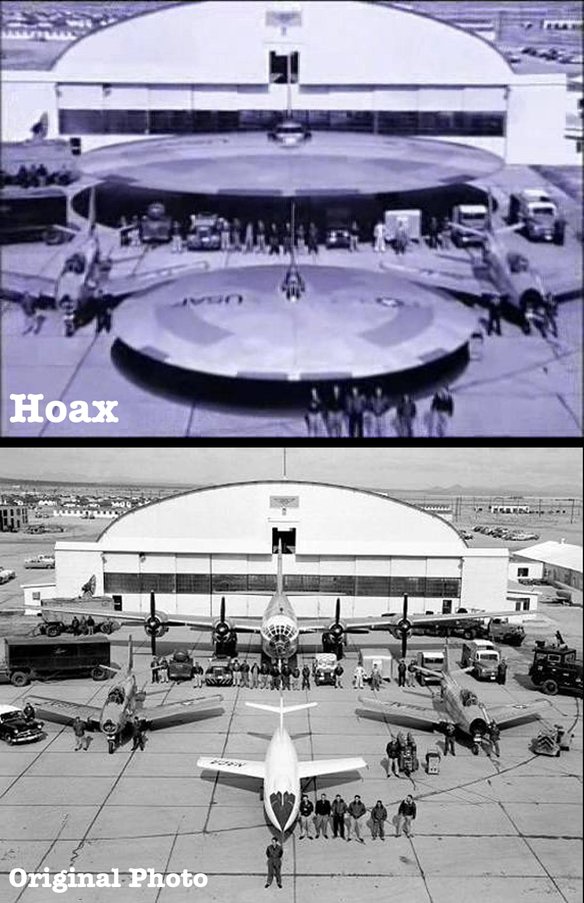 If you become interested in the subject you will inevitably fall into one of these categories or levels depending on your belief system, level of skepticism and drive for the truth. If a person decides to become involved with the study of the phenomena, it’s best to enter the arena with no pre-conceived notions or no “set in stone” belief system so there is no compromising the search for the most legitimate answers.

The following three paragraphs explain the diagram below. These layers can be applied to just about any subject and don’t necessarily exist within the UFO community alone, but are clearly attributed to individual education about one subject or another.

The first layer is heavily influenced by personal belief and usually involves people who believe in every story, video or photograph that comes down the road. This group does not deal with facts and form their own mythology surrounding the phenomena using bits and pieces or a mishmash of information. This group is set in their beliefs and usually cannot be changed no matter what facts are laid out for them. The reason this layer is on top is because unfortunately, this is the layer that gets the most attention and ends up with millions of views and lots of news coverage. You would assume that the news organizations would be much more diligent in fact checking or verifying information but this is far from the truth. Some are much more interested in the revenue they can generate whether the information is correct or not and this has become highly damaging to the study of this phenomena.

The middle layer consists of people who perform minimal fact checking and usually believe in a mixture of facts and mythology. There are many examples of this, but a great example that many veteran ufologists are familiar with would be the infamous Roswell case and the mythology that was built up around it for many decades. From multiple witnesses that have come forward years later to the alien autopsy film that became worldwide famous just a few years ago, this case has become a giant mixture of fact and fiction. Unfortunately, there are some that still believe the autopsy film was authentic and directly related to the crash at Roswell, even though the creators of this film have come forward and admitted creating it while making a large amount of money from it. Usually a giant red flag for me is if there’s money involved, it’s probably not legitimate and someone’s filling their pockets.

The bottom layer is made up of diligent researchers who will stop at nothing to dig up the facts. It took me a number of years to get down to this level and stop buying the mythologies that were created in the UFO community and are still being manufactured to this day. If you reach this level there are some rules that are very important to follow. Any preconceived notions concerning the phenomena have to be thrown out because we have virtually no actual facts revealing the nature or the origin of the phenomena. It is also extremely important to not let any beliefs guide your search for the truth and steer you in the wrong direction.

"It’s best to enter the arena with no pre-conceived notions or no “set in stone” belief system so there is no compromising the search for the most legitimate answers." 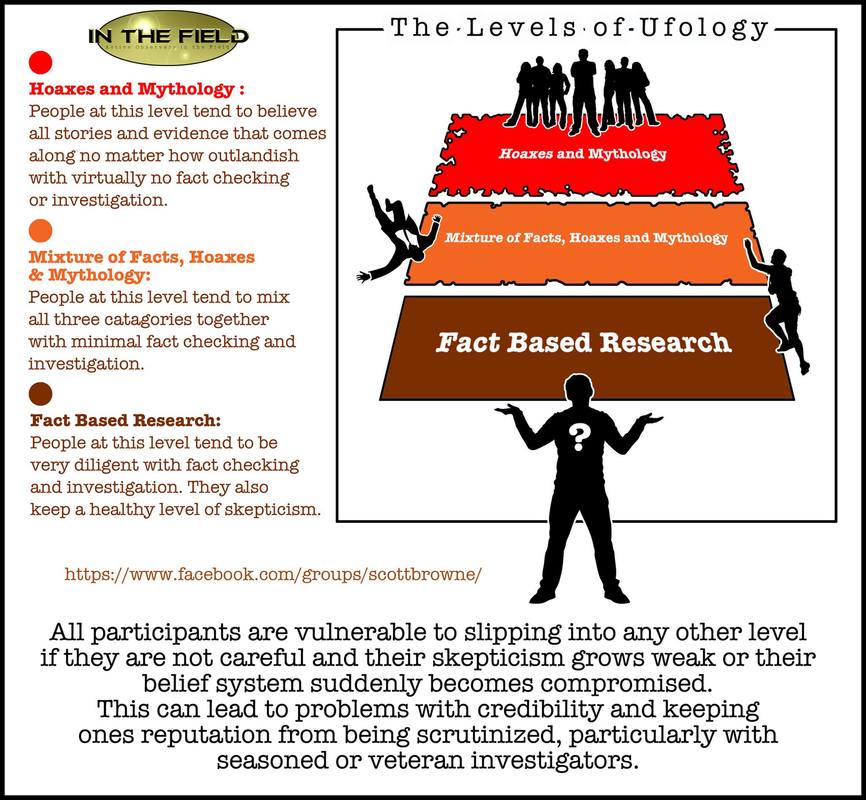 Every year we create a list of hoaxers and dis or misinformation sites concerning the phenomena that are strictly banned from bing posted in ITF,,,,,These are the last 3 years versions: 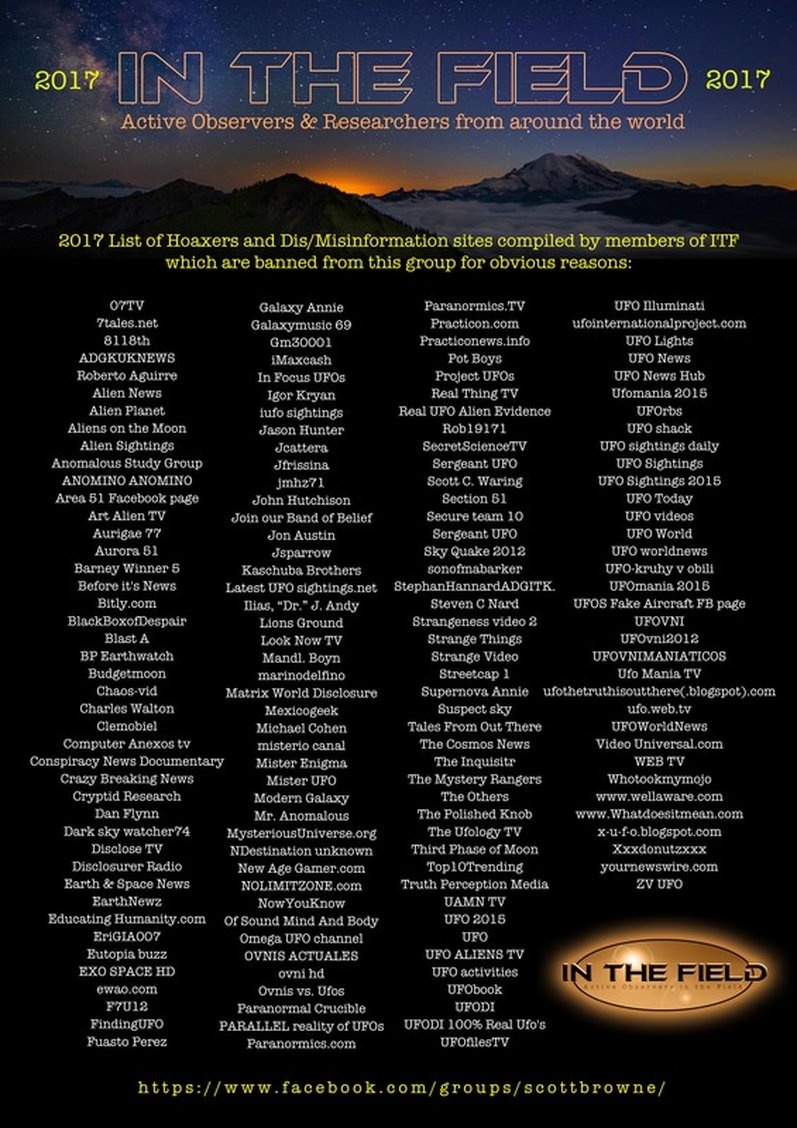 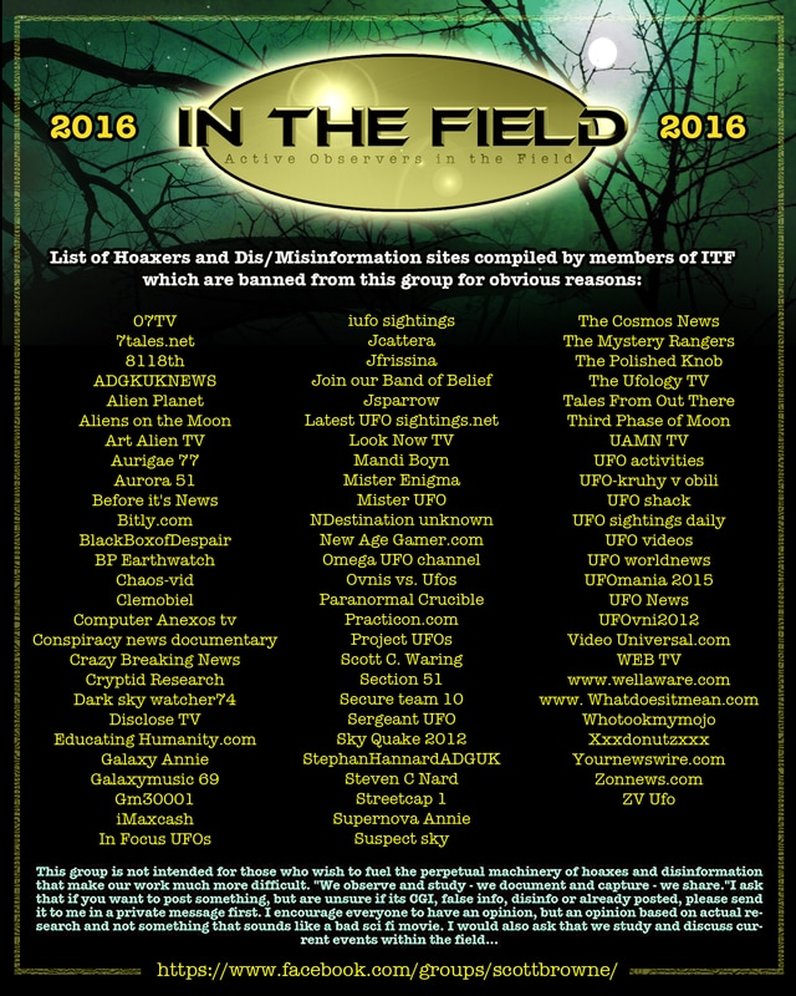 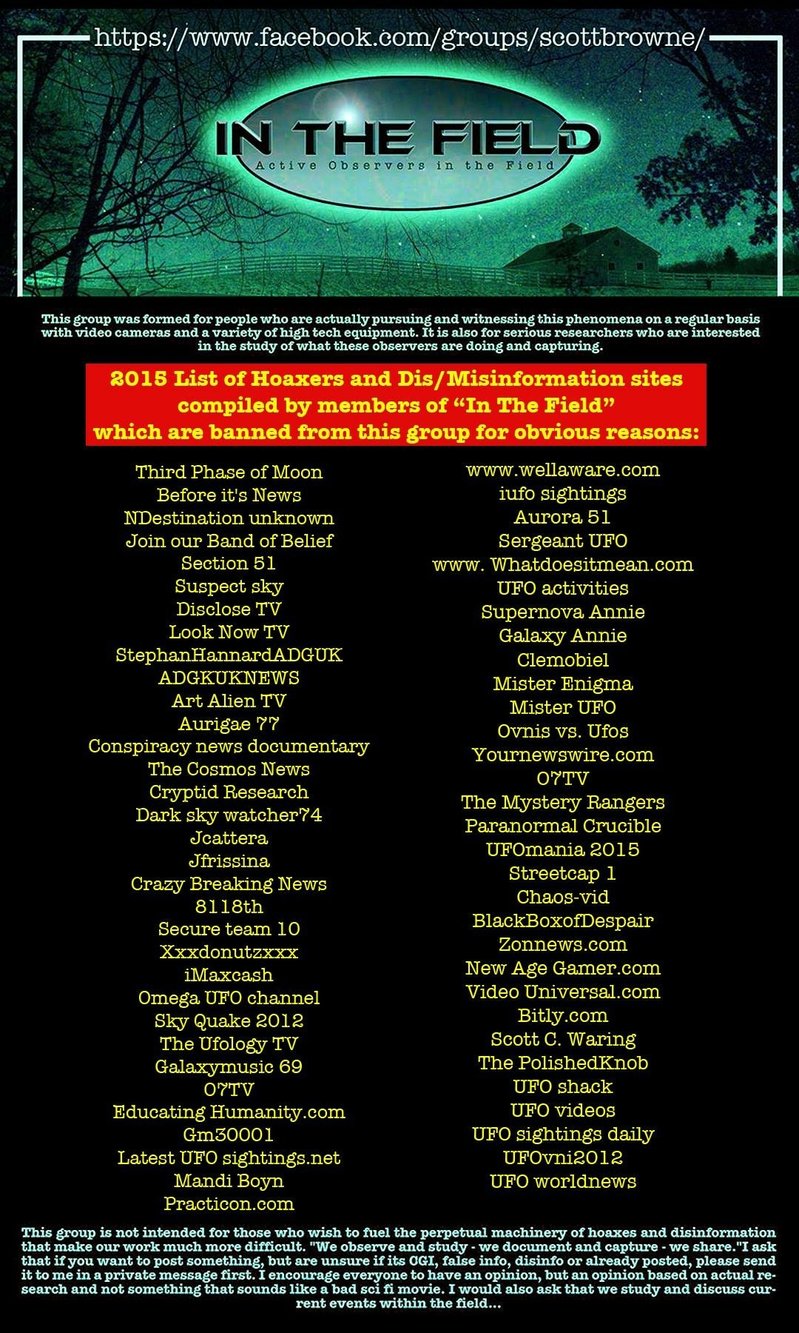 Stay diligent and when you think you’ve dug deep enough, keep digging and verify everything concerning what you’re looking for. Unfortunately over the years I have witnessed some very respected researchers within the community endorse some of the biggest hoaxes and completely destroy all of their credibility. This is something that we all must be aware and very careful of for obvious reasons.